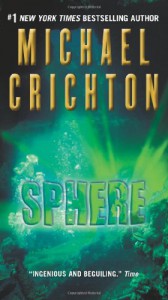 One of the fun things about reading is coming across echoes of other books you've read. I recently finished After Worlds Collide, and in one scene, a couple of characters discover a kind of plaque or road marker left by an alien civilization. On it is a design; not words or any real picture, just a design. In some inexplicable way, that design seems somehow un-human. And now, in Sphere, etched upon the titular object, is another strange design, one which, again, the hero finds to be un-human. Now, these are basically two-dimensional abstract patterns. Humans, of course, are very familiar with both these dimensions, which have been well explored not just by artists but by billions of doodlers throughout history. I kind of figure just about any design imaginable has been rendered by someone at some time in history. And I sure can't get my mind around such a drawing being so odd that it is essentially inconceivable, and therefore un-human. Nope, with all due respect to the authors, I'm just not buying it.

Happily, this being a Michael Crichton novel, that's about the only thing that isn't, on some level, believable. The guy was a master of milieu, whether the setting was a large corporation, a dinosaur theme park, or a deep sea Navy habitat.

That's where we find ourselves here, a thousand feet down in the Pacific ocean, where the Navy is investigating a very large, very strange vessel at least 300 years old. But it isn't any boat; it's a spacecraft.

Though the Navy is in charge of the overall mission, the primary investigators are a group of civilian scientists -- a mathematician, an astrophysicist, a zoologist, and a psychologist. This allows Crichton to attack the problem of the ship, and the mysterious sphere found inside, on a number of different fronts. But Norman, the psychologist, is the hero. He's there to keep everyone working together smoothly, a decidedly difficult job under the best of circumstances, given the egos and insecurities of the other scientists.

But these are hardly ideal circumstances. First of all, there's all that crushing water above them. Farther up still, a cyclone blows in and sends the support vessels running for safe haven. Meanwhile, down below, strange things begin happening. And then the monsters attack.

In broad outline, that might sound like any number of other books you've read or movies you've seen, and it is. The difference is that Crichton handles it all ridiculously well. In an early scene, Norman discovers that Harry, the mathematician, tried to make out his will shortly after arriving in the habitat. It's a small detail, but one that pays off not once, but twice during the course of the story, in two different ways. A Crichton thriller is anything but ham-handed  (State of Fear being, perhaps, the exception that proves the rule).

In fact, it's Crichton's subtlety that can make him difficult to synopsize: everything connects and whatever you might mention comes off sounding like a spoiler. The truth is, beneath the outline, the details of the story aren't the typical blend of science fiction and horror. There's the ship, for example, and the sphere, and the monsters...but I'll just have to leave it at that.

This is one of Crichton's best books, and Crichton at his best is exciting, suspenseful, funny, and perfectly plausible.